A few years ago, Zach Levin was part of a young group of swimmers who helped Haven Beach Club break the St. Francis Community Center’s reign at the top. This year, Levin helped lead those younger age groups in a more dominant effort.

“In 2019, our 8s and 10s carried the team, and this year they did it again,” said Levin, one of HBC’s 12-and-under swimmers, who was part of two relays. winners and scored crucial points for first place in the individual backstroke, as the Hurricanes captured the Long Beach Island Swim Club championship crown with 459 points. “Our whole team is like a big family, and we really got involved this summer. Our second run swimmers did really well and got us a lot of the points we needed.

With five teams competing, every point in a league game counts. But with a scoring system that includes second-inning points, depth really comes into play, and HBC has made the most of its depth, especially in the 8, 10, and 12-and-under age groups. 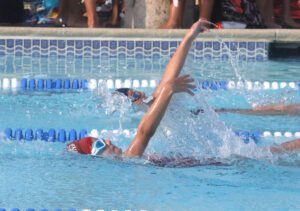 Within those divisions, the Hurricanes’ youngsters won all three medley relays – with the relays only the first runs being scored – as well as the three freestyle relays to account for a whopping 120 points.

In the individual events, Haven Beach swimmers in these three age groups won six of 12 first-run races in butterfly, backstroke, breaststroke and freestyle, but all HBC second-run swimmers won their races, accumulating an additional 60 points.

“The whole team has been great this year,” said 16U breaststroke specialist Claudia Primus. “But we had some really good young swimmers, and I think they really made a difference in this competition.” 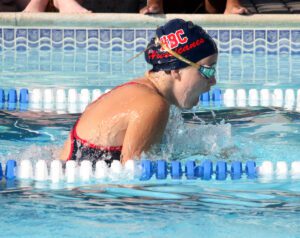 SLIDING ALONG: Maddie Marais of the Haven Beach Club completes the breaststroke leg of the 10 and under medley relay.

St. Francis scored their first 20 relay points in the 14U medley when Ava Fields, Guy DeVita, Francesca Fields and Jack Delaney took the win, while the Sharks’ Austin Silverman, Christopher Schumann, Lukas Davis and Tyler Finkle edged out the Brant Beach Yacht Club and HBC crews in the 16U medley. And while HBC was only four points up with plenty of events to go, the Hurricanes’ lead only grew from there.

St. Francis’ Maggie Puorro kicked off the butterfly events with a victory in the first 8U end, before Finnegan Baronian took first place in the 10U end. Ila Molettiere scored for first place in the SFCC in the first round of the 12U flight before Owen Hamnett delivered BBYC’s first points at the 14U butterfly, and Schumann took the victory in the 16U flight. Still, young butterfly swimmers Baldino, Zoe Esibill and Erin Craig provided huge second set points for HBC, and the Hurricanes’ advantage was five points. 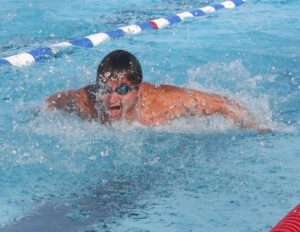 ALMOST THERE: Jeff Muhlschlegel of the Barnegat Light Yacht Club sails towards the wall during the 16-and-under butterfly.

In the 8U backstroke, Puorro won his second straight race to move St. Francis in the second batch of individual events, but Haven Beach’s Erin Barry, Kevin Cheeseman, Anabel Baldino, Levin and Sally Walker swept the top spots. next five scored. back sleeves to push HBC further into the lead. Ava Fields of St. Francis and Skylar Kliesch of Brant Beach scored for first place in the opening sets of the 14U and 16U backstroke events, but Maggie Hoffman grabbed an extra five as she won the second seed at 16U to give HBC a 228-219 drive.

BBYC’s Jack Van Orden and Peyton DeBevoise took the top spots in the first heats of the 8U and 12U breaststroke events, but HBC’s Charlie Kiernan, Maddie Marais, Hannah Kitay and Wes Wielgus picked up first place points in the other heats of their respective races. DeVita, Schumann and Ava Fields added more first-place points for SFCC, but Jenny Adamo picked up another big win in a second set during the 16U breaststroke to make a 16-point difference between the Hurricanes and Sharks.

Haven Beach went on to win five of the next six runs scored in the freestyle, as Rossi, Chloe Marais, Cheeseman, Wielgus and Rhys Esibill delivered in their respective events, with only Anna Molettiere scoring the best runs for St. Francis in the 10U free. The Sharks’ Delaney, Chris DeLeeuw, Silverman and Finkle won the next four sets, but the deficit was 20 runs before the freestyle stints.

“I knew the numbers added up, but I never count on anything until all the points are scored,” said Hurricanes head coach Jennifer Duffy, whose team went undefeated during the season. regular season, which included a tie against St. Francis in the teams. ‘ first double encounter of the season several weeks earlier. “We coaches kept telling the kids it was very tight, and it kept them focused for their next race. But we felt it, that the points added up favorably for us. 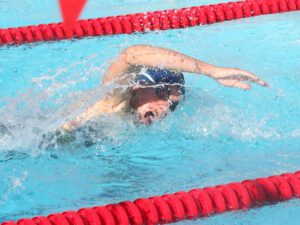 GET A BREATH: Elle Banks of the Brant Beach Yacht Club heads for the finish of the 12-and-under medley relay.

The lead increased to 22 points after the HBC crew of Grant Marais, Shea Baronian, Kiernan and Rossi claimed victory in the 10U freestyle relay, then increased another two when the quartet of Finnegan Baronian, Keltz, Cheeseman and Maddie Marais took the top spot in the 10U freestyle relay. The lead was 28 points after Hurricanes D’Amico 12U, Sally Walker, Rhys Esibill and Levin crowned HBC’s top spots.

In 2019, when the Hurricanes last won the title, the difference was seven points. 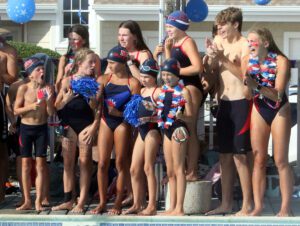 RAH-RAH! : Haven Beach Club swimmers cheer on their teammates during one of the relays on Aug. 11.

“It’s really cool to have won, especially because some of us are a little older now and can appreciate it a little more,” said 16U swimmer Owen DiNapoli. “After finishing second last year, we didn’t really know how things were going to go this year because we lost some great 16s. But we brought a lot of young kids who could swim really well. Many of them are already very strong and fast, and they really made the difference tonight.

Primus said after the Hurricanes defeated St. Francis in their second game of the season — five days after their tie — confidence in the team skyrocketed.

“We hadn’t beaten St. Francis in a doubleheader since maybe 2011 or 2012,” she said. “So that was a big deal and it gave us a huge boost of confidence. Our team was really tight-knit this season, and I think that’s been a big part of our success as well.

Coach Duffy is already looking forward to next summer.

“We’ll see how it goes,” she said. “Hopefully from here our swimmers get a little stronger and a little faster and their techniques improve. If they all come back, it may get even more exciting than right now. But that – those kids coming together, swimming their best and cheering each other on – that’s what it’s all about.