A new kind of beach and water cleanup is coming to West Michigan: drones.

One of the beneficiaries will be the Muskegon Lakeshore, which participates in the Great Lakes Plastic Cleanup Program and will house the Pixie and BeBot drones.

The project “will strengthen stewardship of our precious waterways and majestic Pere Marquette Beach,” says Muskegon Mayor Ken Johnson. “We are excited to see these innovative devices in action, and our community is grateful for the collaboration of Meijer, Grand Valley State University Annis Water Resources Institute (GVSU-AWRI), and the Council of the Great Lakes Region (CGLR) to advance this environmentally friendly initiative.

Meijer is spearheading the launch of these innovative technologies as part of the Great Lakes Plastics Cleanup Program which aims to clean up Midwest beaches and waterways in partnership with CGLR.

“It’s a privilege to live near the Great Lakes, which inherently comes with a responsibility to protect them,” Meijer President and CEO Rick Keyes said in a statement announcing the Michigan-based retailer’s participation. .

“Helping to conserve these invaluable waterways is important to the well-being of our ecosystems, our economy and the communities we serve. Meijer has a strong history of environmental stewardship, and we are excited to partner with CGLR because the impact these initiatives will bring will ultimately benefit generations to come. »

Starting this month, Meijer and CGLR will lead cleanup projects at busy beaches, marinas and waterways in Michigan, Ohio and Wisconsin. This will be a partnership with community, state and environmental non-governmental organization (NGO) partners.

The BeBot, a solar-powered and battery-powered drone, can clear 32,000 square feet of beach sand in an hour. It collects plastic waste and other trash – such as bottles, cans, food wrappers and cigarette butts – into a basket for disposal and recycling.

The BeBot rakes the sand without altering the beach environment.

The Pixie drone is intended for water cleanup and can collect up to 200 pounds of materials per trip. It will be used to navigate marinas and other waterways to collect plastic litter and other litter debris floating on the surface of the water. The Pixie will also collect water data including temperature, pH levels, salinity, turbidity and dissolved oxygen.

The Pixie and BeBot drones were funded by a $1 million donation Meijer made to the charitable arm of CGLR in the United States (the CGLR Foundation) earlier this year. The deployment of these devices is part of the expansion of the plastics capture and recovery effort of the Great Lakes Plastic Cleanup Program, an initiative that was launched in 2020 by CGLR and Pollution Probe. 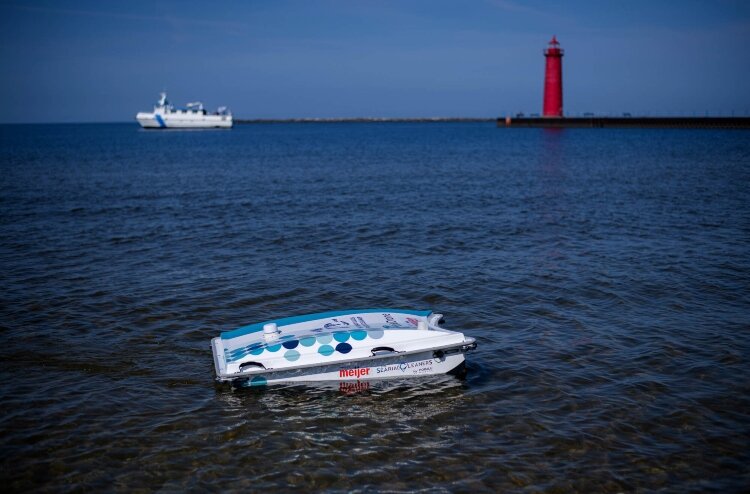 The Pixie drone will pick up litter along Muskegon’s beaches.

GVSU-AWRI representatives operate the equipment along the Muskegon Lake shoreline and handle collected materials once they are collected.

Pere Marquette is one of the first beaches to be cleaned by BeBot on Tuesday and Friday mornings. It cleans a segment of the beach, which takes about 30 minutes. The BeBot is piloted via a remote device operated by Eric Hecox and Ossian Foley, who are on hand while the BeBot operates.

When the BeBot is complete, the waste stream is sorted and characterized by Jamie Cross, the ship’s lead science instructor WG Jackson, and Cate Garretson, a local high school student. Rocks and dreissenid mussels (zebra and quagga mussels) are removed and returned to the beach.

Cross and his team are currently working with Goodwill Industries of West Michigan to recycle wood chips and possibly plastic, to be reused for wood products and HydroBlox, respectively.

“Right now, we’re mostly focused on using BeBot, because we’re familiar with the process of running and sorting what it picks up,” says Cross. “When we go out, our goal at this time is to collect a 32 gallon container of beach debris with the BeBot. This material contains trash, rocks, woody debris and shells. It takes about four hours to sort the waste from the large container. From there, we sort the waste to categorize it. It takes another one to one and a half hours. Our goal is to remove plastic items found in the trash.

This is vital for the beaches and water that surround Michigan, environmentalists say.

“The production of plastics in general, and microplastics in particular, has increased dramatically over the past few decades, and the vast majority of these items end up in landfills or the environment instead of being reused or recycled. quickly becoming a major environmental concern.” says Dr. Alan Steinman, Allen and Helen Hunting Research Professor at the Annis Water Resources Institute and Professor of Water Resources at GVSU. “We need people to be better informed about the problems associated with single-use plastics, and there is also a need to pressure large plastics manufacturers to reduce production or develop new polymers that are easier to break down into benign products.”

While locations for using the Pixie drone are still being identified, all a beach or body of water needs is permission from the owner before a drone is used.

“The City of Muskegon does a great job cleaning up our beaches, and we have local volunteer groups that clean up our beaches as part of a regional Adopt-a-Beach program,” says Cross. “I consider the role of the BeBot to be to reach small objects that the city’s equipment and volunteers have trouble removing. The parts BeBot recovers are quite small, often fragments of larger objects. It will be interesting to see what kind of difference the robots will make in removing plastic from our beaches and waterways.

Meijer is also working on numerous store-level projects that impact the Great Lakes, including one with CGLR to install rainwater gutter filtration systems at select Meijer supercenters. Gutter pans will capture and prevent trash, debris, microplastics and other harmful stormwater pollutants from flowing into nearby waterways. Each trash can captures hundreds of pounds of pollution per year. 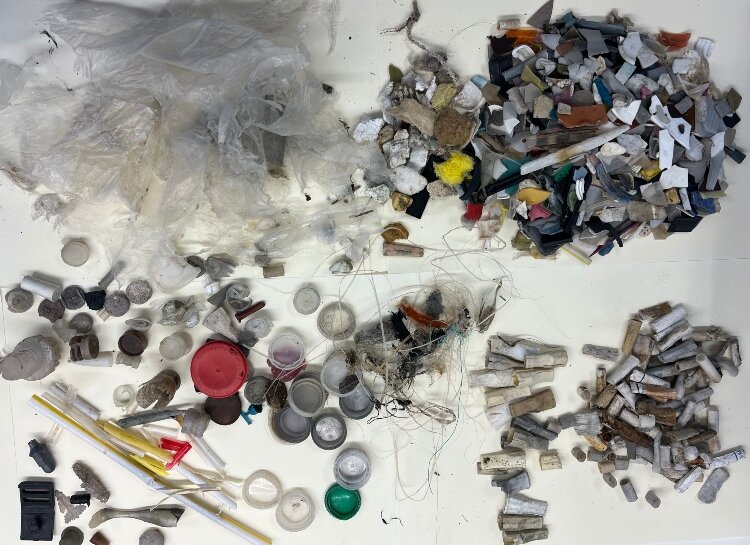 Tiny pieces of trash picked up on a beach by the Bebot drone.

The retailer is in the midst of additional stormwater projects to upgrade car parks at its Traverse City and Benton Harbor supercenters with green infrastructure and is continuing to partner with the Great Lakes Alliance on a handful of storm cleanup efforts. beaches.